about malcolm
Previous
Next

Notes for "A Common Place"

After having a very good initial discussion through Whatsapp we found a few things that we had as common interests- notably, classical music and connections to various places where we would have heard this. Alastair had been a musician and also involved with the Brodsky Quartet and with the Aldeburgh festival.

So ours is an “aural common place”. In one email exchange Alastair wrote this to me, which sums up our ideas.

“ Our Common Place is these two pieces of music, written 15 years apart. As you say, they were friends. I used to work at the Aldeburgh Festival so I have a strong sense of place when it comes to listening to Britten - the Maltings and the marshes at Snape, the stoney beach at Aldeburgh.”

I sent him my first stage print and the design for the final print and this was his response;

“ Thanks for your wonderful prints. I like them both but I LOVE the one with 6 elements and the two colours. It reminds me of a Soviet revolutionary poster somehow - block capitals, the red and the black. I also find myself trying to figure out whether it spells a word… 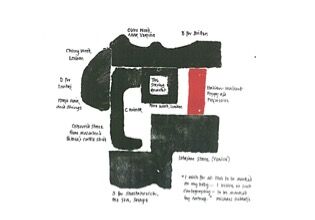 Our common place is an aural landscape. It has borders but no boundaries, not dissimilar to these times. We have met, not in our homes or even countries, but at a musical crossroads not marked on any map. This is our meeting point, our common place. To this crossroads we have brought olive wood from the hills near Verona, cherry wood from London, Istrian and Cotswold stone, the sounds of a shingled beach, the bells of Venice, the percussion of string quartets….

The two composers met in 1960, the year Shostakovich wrote his 8th String Quartet. Britten’s 3rd String Quartet was his last completed work before he died in 1976. Shostakovich visited Aldeburgh in 1972 where Britten showed him his work on Death in Venice. And it’s Venice that inspired the final movement (‘La Serenissima’). Britten briefly quotes from his opera and he includes the notes of two bells he heard during this last stay. The end of the work is, in his words, “not final, but a question”.


My explanation of the print was that it is not so much a strict interpretation of the music but tries to achieve a sense of place. It attempts to build a relationship, a dialogue between the two composers and therefore, one in which we have found a place for discussion between ourselves in the sharing of our interests.

I chose pieces of wood or stone that had a personal resonance, but might also reflect elements related to these composers. Across the top is a piece of Olive wood from the vineyards of the Negrar valley just outside Verona, the two curves dip down to form the partial outline of a “B” as in Britten, to the left a block of Cherry from London, in the shape of a “D”, for Dimitri and the saw marks I see as resembling strings, from the instruments of the quartet. Next is a roughly “C” shaped piece of stone, from my fathers’ farm in the Cotswolds. The 8th quartet by Shostakovich is in C major. Then comes a square “O” shape, this is from some Pine wood brought from London. The large sort of “S” shape at the bottom is printed from Istrian stone from the region near to my stone carving studio. This has a connection to both composers, S for Shostakovich and to the “sea” for Britten, I always relate Britten to the sea. Istrian stone was also the stone used in Venice for many important buildings due to its capacity to withstand damp, so it’s interesting that the final movement of the Britten quartet, La Serenissima was inspired by Venice. Finally the red shape, this is from Italian Walnut. I felt this had a percussive feel to it and Alastair mentioned that he had been listening to a piano version of the Shostakovich 8th, this shape felt just right for that and I wanted it to be red, for contrast but also I associate red with Soviet Russia, which is the era Shostakovich lived through
Next
Previous